THE FACTS ABOUT PLASTIC

The first synthetic plastics were created in the early 20th Century, yet it was only around 1950 that plastics began to be used widely. Recently plastic production has gone wild: over half of all plastics ever made have been produced in the last past 15 years. Nearly all plastics are made from fossil fuels, and “none of the commonly used plastics are biodegradable.” As scientific experts point out, the same characteristics that make plastics so attractive to manufacturers, their “durability and resistance to degradation”make them “difficult or impossible for nature to assimilate.” In other words, God’s creation simply does not know what to do with plastic. Sunlight does weaken the material, causing it to fragment into small particles known as “microplastics,” which simply makes cleanup much more difficult.

Approximately 30% of all plastics ever made are currently in use.

As for plastic that is not being used, there are three basic outcomes. It is:

Destroying it is done primarily by burning it. Discarded plastics are either landfilled or become trash. Over 275 million metric tons of plastic waste was generated in 2010.

PLASTIC IN GOD’S OCEANS: A PROBLEM BOTH BIG AND SMALL

Up to 12 million metric tons of plastic waste are entering God’s oceans every year, where it makes up nearly three-quarters of all trash in the oceans. It is found on beaches and coastal areas, but most of it is floating in God’s oceans. Some of this plastic waste has converged into five massive floating islands of trash around the world, called gyre’s, or ocean garbage patches. The most well-known is the so-called Great Pacific Garbage Patch, which is currently over twice as large as Texas and is growing exponentially. 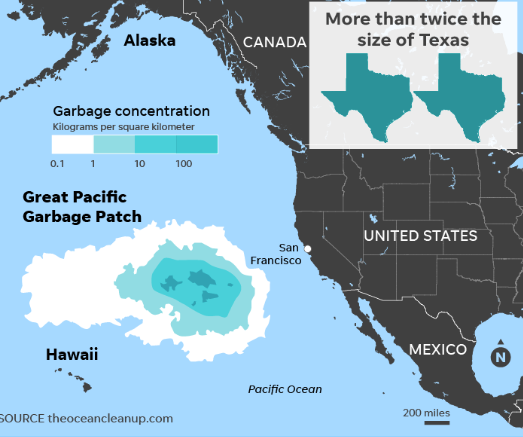 Currently it is estimated that over 5.25 trillion plastic pieces and particles weighing nearly 270,000 tons are floating in God’s oceans.

Sunlight and other factors have helped to break some of the larger and normal size plastic down into smaller and smaller bits or particles, including many too small to be seen by the naked eye. When these small bits are less than 5 millimeters, they are called microplastics. Recent studies have shown that “many more organisms ingest small plastic particles than previously thought.” This results in microplastics moving up the food chain as larger predators feed on prey that have ingested microplastics. This is a serious concern for human health, given that toxic pollutants like PCBs, DDT, and BPA either are contained in the plastic or adhere to it from other sources in the oceans. In addition, plastic “can also adsorb metals and bacteria, sometimes at concentrations many times higher than their immediate surroundings.”

Microplastics have even contaminated the Arctic, which has become a major plastic pit. Arctic concentrations of plastics are many times greater than the Great Pacific Garbage Patch. And the problem is getting worse. Recent measurements have found that Arctic plastic concentrations are two to three times higher than previous studies, in large part because they were able to measure smaller and smaller particles. Researchers found “plastic particles that were only 11 micrometres across. That’s roughly one-sixth the diameter of a human hair …”. About two-thirds of the plastic particles they found in Arctic ice belong to the smallest category, 50 micrometres or smaller.