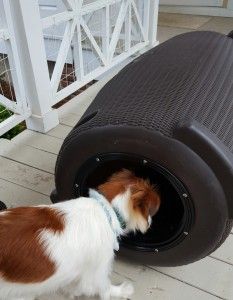 Our family has been looking for a meaningful way to care more for God's creation. Last year we planted milkweed for the Monarch butterflies, but this year we were ready to make a big change. Being aware of our impact on the environment was a new goal for our family, focusing on the three R’s (reduce, reuse, recycle) in our daily lives, but one area we never felt comfortable to try was composting.

Composting always seemed scary to me since the idea of a big pile of stinky, rotting trash in my yard was unappealing to say the least. Plus, we lived by a lake and had lots of wildlife that I figured would probably make a mess of a compost pile. But when I saw a compost tumbler that was made like a big brown recycled plastic wicker barrel at a wholesale club, I opened up to the idea that maybe we, too, could join the ranks of those who turned their kitchen scraps into “black gold” for the garden. I did a little online research and learned that compost is a great natural amendment that feeds plants while keeping the soil healthy, which you can spread around the garden.  Plus it’s free and organic!  With landfills filling up with one-third of waste that could have been composted, it started to make sense for our family to give composting a try.

With my husband out of town for the weekend, I loaded up the kids and headed to the store to buy the big compost tumbler for about $100, which I hoped would pay for itself in a few years. My thirteen year old and I wrestled it into the car, got it home, and put it together in about an hour from a pile of bolts and parts (while trying to keep our curious dog Maddie out of the barrel.)  We proudly rolled it over to the side of the house and it fit right in next to the recycling bin and trash can.  It was time to find something to compost, so after a quick stop in the kitchen to grab coffee grinds left over from the morning, along with egg shells, apple cores, and some wilted spinach, we unscrewed the top and tossed it all in. These are considered “greens” because they add nitrogen to the compost mix. Next, we added a few shovels-full of dried leaves from a nearby pile, which added the “browns” or carbon-rich part of the equation needed for successful decomposition. Then we twisted the lid back in place and gave it a tumble. You could hear all the stuff flying around inside as it swung a full circle. Turns out, the tumbling adds oxygen that helps the microbes get working on changing all those scraps into great compost, and it sure beats turning the pile with a pitchfork like the traditional way.  I’m not sure if you can over-tumble, but we might be in danger of that since it was actually kind of fun!

The next day I bought a small lidded can at a discount store for $10 to collect kitchen scraps for the compost bin.  It was perfect because inside it had a removable can with a handle, and I decorated the white lid with pictures of what the family could put inside to compost, since the list was pretty long.  Tea bags, egg shells, veggie scraps, flowers, coffee grinds, fruit scraps, nut shells, corn cobs… (But avoid animal products like meat and dairy, and high-fat foods like peanut butter.)  As someone who hates to waste food, it was so satisfying to compost the fruit and vegetables that went bad instead of throwing them out.  Even our teenager quickly got in the habit of putting scraps in the small can, and taking it out to the tumbler when it got full.

After a month of using the compost tumbler, I am happy to report that our yard smells fine, and the contents in the barrel keep shrinking down to make room for more.  Best of all, our family has learned how to reduce the amount of trash we produce, while at the same time, making “black gold,” which will help us feed our plants in the garden next season.  Adding composting to our family routine for Earth Day was easier than we ever expected.  What will your family do to honor our planet this Earth Day?