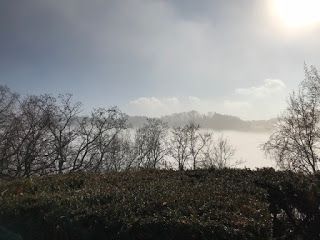 Take no part in the unfruitful works of darkness, but instead expose them.

It's foggy in Pittsburgh. It's the kind of fog that prevents you from seeing down the street, but not out your window. This creates a sense of insulation and isolation--that you're all alone in space rather than part of a large urban city. The fog is probably because of Pittsburgh's hilly topography, or the convergence of the Allegheny and Monongahela rivers, or the unseasonably warm weather in the first weekend of December.

I found myself in Pittsburgh for a meeting of the United Methodist Women Be Just Be Green Jurisdiction Guides. We came from around the United States to set outreach goals and strategy, decide how to communicate our advocacy campaigns to our members, and plan our presentations for Assembly in 2018. Because our advocacy campaign is about methane and natural gas extraction or "fracking", we organized a visit to local communities in Pennsylvania impacted by the natural gas industry. We partnered with local activists and families and listened to their stories.

When fracking began to increase in Pennsylvania in the early 2010s, fracking operators claimed that the United States had a 100 year supply of cheap natural gas and that fracking could help lead to energy independence. They also promised jobs. What has happened instead is a devastation of land, air, and water in the name of progress. The majority of the jobs created were temporary construction jobs. It is very unlikely that natural gas will be used to heat our homes and power our vehicles for the next generation, as the supply has been overestimated. We may already have passed the peak of natural gas extraction. It is rapidly becoming too expensive to extract natural gas--the energy return on energy invested (EROEI) profit margin is closing.

What is clear are the health and environmental risks from fracking. Allegheny County, where Pittsburgh is located, is in the top 2% for cancer risk from air pollution. Up to 14% of Pittsburghers suffer from asthma as compared to the national average of 8%-10%. Asthma acutely impacts children, and is a leading cause of chronic school absenteeism. Air pollution exacerbates cardiovascular disease and is a significant cause of premature death among those with preexisting cardiovascular conditions. Air pollution has been connected to autism, diabetes, and dementia.

We toured Beaver County, PA where Shell is planning to build an ethane cracker plant, the largest petrochemical facility in North America. This plant will increase demand for fracked natural gas which will be turned into plastic. It will also trigger the construction of an ethane pipeline system that will cross the Ohio river.

I was struck by a stone marker I read at one of our tour stops. The land where the cracker plant is being built was gained by treaty with the Delaware, Wyandot, Chippewa, and Ottawa Indian tribes. Its devastating to think of how we've abused the land, air, and water that was never ours to have.

We continued on our tour to Washington County, the most heavily fracked county in Pennsylvania. We saw fracking pads and waste water retention ponds within 900 feet of an elementary school. We heard about the mystery surrounding chemicals in fracking fluid and methane emissions, which the fracking operations fight not to disclose. We watched as several large trucks full of fracking waste merged onto a highway and wondered aloud what would happen if one of the trucks spilled it's contents.

We met a man and his son who live with a fracking well in their backyard. The man has suffered a brain tumor which robbed him of his sight in one eye. He has kidney disease and endocrine problems. His son is incontinent. He has learning and attention problems. He was burned by an unseen chemical in his bathtub water as a small child. We met a mother who's child has leukemia. We met a mother who has to keep air quality monitors in every room of her house to keep an eye on the particulate matter in her air. They can't drink their water. They're concerned about the animals on their farm. They are watching their land be poisoned in front of their eyes, but since the fracking well isn't technically on their land they have no legal recourse. No one can move because they can't sell their homes.

As our tour progressed, the fog lifted. The sun began to shine. And the shadows around the fracking industry lifted. I saw with clarity the lies, corruption, manipulation, and greed. The evil of putting profits over people was exposed. But I felt a small sense of relief that fracking wasn't going on in my backyard--my children were safe. And then three days after I returned home from Pennsylvania there was a natural gas pipeline explosion in Illinois that killed 2 people, a father and son working on their farm. If you don't think natural gas affects your community, think again.

But the fog is lifting. There is hope. There are dedicated activists like Moms Clean Air Force, Clean Air Council, and Protect Our Children fighting to shine light on this industry and protect our common land, air, and water. There are resources like the Oil & Gas Threat Map that can help you assess your family's risk. Don't be afraid to educate yourself about fracking, speak to your representatives, and write letters to the editor. Speak truth to power. The only way to make change is to do the hard work. We cannot turn a blind eye to our brothers and sisters suffering in Pennsylvania, or Texas, or Oklahoma. But if we work with one another, we can lift the fog together.